A Dictionary of Legal Usage 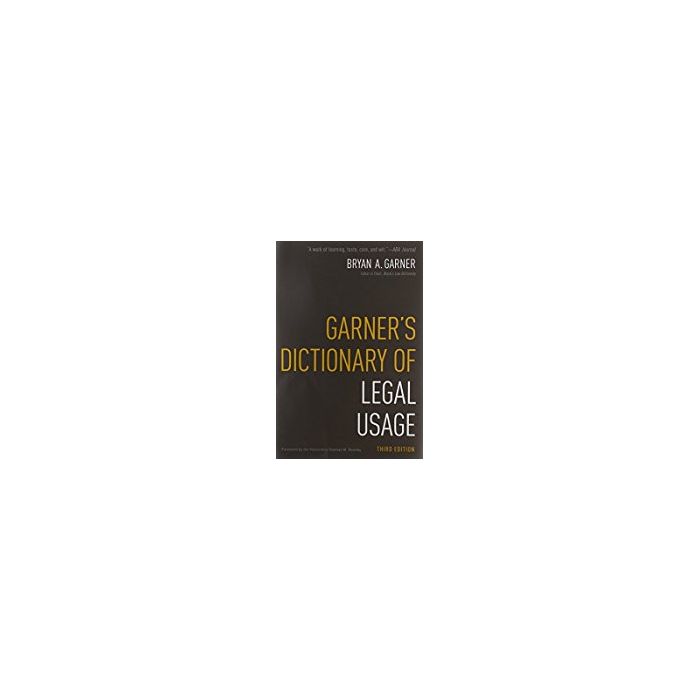 This new edition of Garner's Dictionary of Legal Usage discusses and analyzes modern legal vocabulary and style more thoroughly than any other contemporary reference work. Since the first edition, Bryan A. Garner has drawn on his unrivaled experience as a legal editor to refine his position on legal usage. The new Third Edition remains indispensable: Garner has updated entries throughout, while adding eight hundred new entries and new senses of existing entries, as well as thousands of new illustrative quotations from judicial opinions and leading lawbooks. Garner has also revised the selected bibliography, and expanded and updated cross-references to guide readers quickly and easily.

The GDLU now has much greater depth in particular areas of law, such as immigration and intellectual property. More examples from British English sources are included, to illustrate the similarities and differences between American and British English, and to aid readers using foreign common-law sources. Dozens of sets of near-synonyms that have long perplexed lawyers are now concisely defined and differentiated. Asterisks now precede words and phrases that are invariably inferior forms, making it easy for readers to tell which ones to avoid. A new category called Interpretation, Modes of, outlines the theories and defines the terminology of interpretation, also known as hermeneutics. Entries contain the most comprehensive glossary available for words and phrases related to legal interpretation. And, for the first time ever, sources are consistently cited throughout, with a solid majority of citations from post-2000. A new preface introduces the reader to this edition and discusses the extensive content that has been newly incorporated.

Influential writers and editors rely on Garner's Dictionary of Legal Usage daily. It is an essential resource for practicing lawyers, legal scholars, and libraries of all sizes and types, functioning as both a style guide and a law dictionary, guiding writers to distinguish between true terms of law and mere jargon and illustrating recommended forms of expression. Common blunders are discussed in ways that will discourage writers from any further use. The origins of frequently used expressions are described with engaging prose. Collectively, there is no better resource for approaching legal writing in a logical, clear, and error-free way.

Features Entries are full of indispensable information, from the origins of common terms to frequently misused phrases Valuable resource for practicing lawyers, scholars of the law, and anyone with an interest in legal writing Bryan A. Garner reaffirms his position as the foremost expert of legal usage and style An essential, classic usage guide, with fascinating, informative, and lively descriptions. Earlier editions have received published accolades from throughout the world. Fully revamped and expanded new edition with more than 800 new entries and new senses of existing entries and thousands of new illustrative quotations