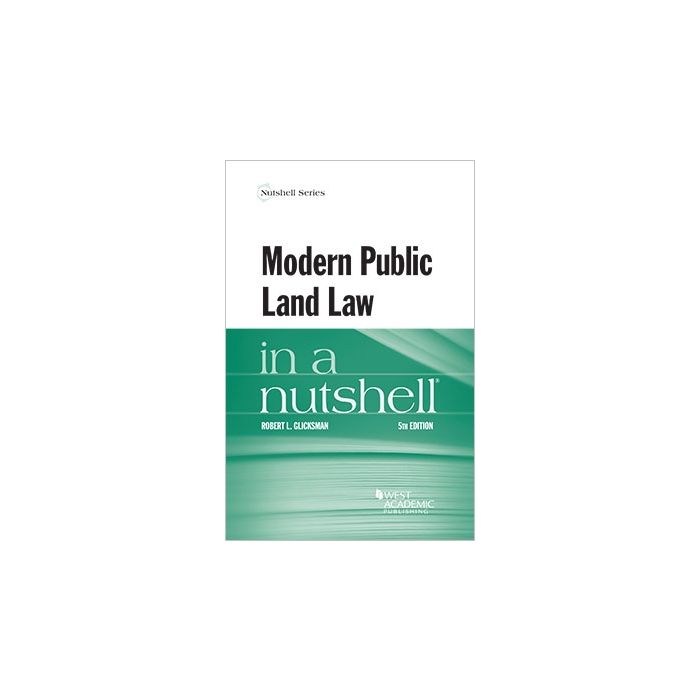 Skip to the beginning of the images gallery
Description
The federal government owns more than 1 million square miles of land in the United States. The expert authors of Law in a Nutshell: Modern Public Land Use summarize the rules and doctrines governing disposition, allocation, and protection of this land and the natural resources it contains.

Topics include the history of public law; constitutional authority on federal public lands; Congress and the states; authority on public lands; the executive branch; and the courts. This also discusses resources, such as water, minerals, timber, wildlife, and recreation, and their preservation.

Don't let their small size fool you: West's Law in a Nutshell series represents the depth and breadth of the law in over a hundred different areas. Nutshells have a loyal following who swear by their succinct and easy to understand treatment of the law, and this particular title is a great illustration that learning the law doesn't have to be dry and confusing.
This book analyzes all significant aspects of management of lands and resources owned by the federal government, focusing on the national parks, the national forests, the national wildlife refuges, and the remaining public lands. It provides a brief historical overview of public land law in the United States and analyzes the constitutional basis for ownership and regulation of federal lands and natural resources. It covers the statutory basis for determining appropriate uses for federal lands and for assessment of the environmental impacts of activities on those lands. It also analyzes the rules governing planning and management of the water, mineral, timber, range, wildlife, recreation, and preservation resources on federal lands. Finally, it covers important recent public land law developments — in Congress, in the land management agencies, and in the courts.
Reviews
Write Your Own Review
Only registered users can write reviews. Please Sign in or create an account