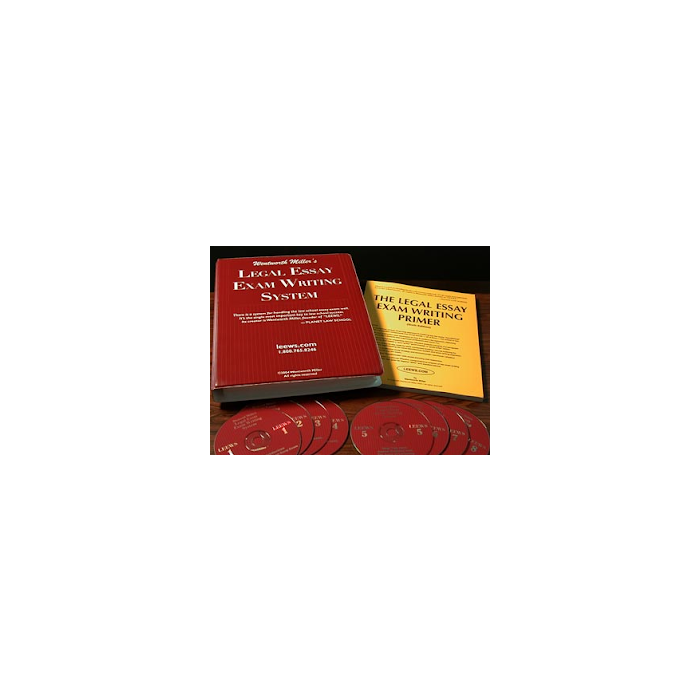 Skip to the beginning of the images gallery
Description
The LEEWS live program has acheived legendary status among those preparing for the rigors of legal essay exam writing, and now you can experience the program right on your own schedule!

We are proud to offer the LEEWS: Legal Essay Exam Writing System Audio Program, which includes eight audio CDs, each approximately 70 minutes in length, the LEEWS Primer text, a quick reference bookmark, and a set of 30 diagrams corresponding to illustrations placed on a blackboard or flipchart during the live LEEWS program. Even in the final days before an exam LEEWS can make a significant difference.

The LEEWS: Legal Essay Exam Writing System Audio Program is not a mere recording of the live LEEWS program. This audio program was produced in a sound studio from a transcript with an audio listener in mind. If anything, the audio program is more complete and articulate in setting forth LEEWS than the live program! You'll feel as if you're attending live, but you'll work at your own pace. According to the publisher, "there is no discernible difference in effectiveness between the live and audio lecture"!

From A Customer Testimonial: "I am writing to tell you how much I appreciate the LEEWS system. Like most first year law students, I was somewhat neurotic about grades. So when I found LEEWS on the internet, I decided to give it a shot. I purchased LEEWS last summer, before my first year began. I tried to apply the principles throughout the year. As the first semester progressed and I began to see what professors wanted, I realized that LEEWS was really going to work. I was pleasantly surprised to find that I ranked 2nd at the end of the first semester. I am certain that I would have been 1st after the second semester, but I did not use the system on a final ( I thought that I could beat the professor at the silly little game she likes to play on finals, but it backfired, and I would have been much better using LEEWS). I got a significantly lower grade in that class, but I still ended up 5th out of 152 students.

LEEWS was truly a Godsend. I know that I could not have performed this well without your system. It is remarkable how much the system reduced my stress and allowed a person of average intelligence to excel on such difficult exams. I believe that it is invaluable to know what professors want and to have a plan that will allow you to wade through their garbage and give it to them."
Reviews
Write Your Own Review
Only registered users can write reviews. Please Sign in or create an account